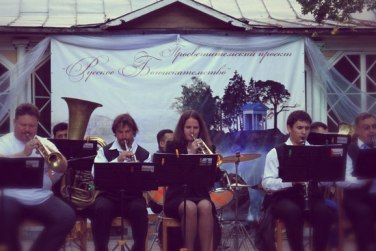 On September 13, 2014, the education and outreach project «Russian Search of God» organized an annual event – a cultural and educational trip to the «Mon Repos Park».

Year by year the project «Russian Search of God» attracts attention of an increasing number of participants to the little-known history of Christianity in Russia. This event has been held for three years already. About 500 people has visited the Park during this time.

This year «Golden Autumn in Mon Repos – 2014» gathered around 200 guests. During the entire trip from St. Petersburg to Vyborg, in three comfortable tour buses, Mirya Kuznetsova, PhD in History and ThD, delivered a lecture about the history of Christian student movement in Russia.

The last owner of the estate, Baron Paul Ernst Georg Nicolai was a member of the Russian Bible Society and a leader of the Christian student movement, which originated in St. Petersburg in the early XX century. This tour let the guests know about the little-known history of the Mon Repos Park and Estate, the cradle of the Russian Christian student movement, and experience the Evangelical Revival of the late XIX - early XX century.

Research scholars of the Museum conducted an excursion around the park.

The Museum-Reserve «Mon Repos Park» is well-known as the only landscape rock park in Russia. For more than two centuries architects, sculptors, artists and gardeners had been working in the Museum-Reserve designing splendid landscapes and monuments of architecture.

At various times visitors of the manor «Mon Repos» were Anna Kern, Mikhail Glinka, Vladimir Solovyov, the owners of the manor even hosted the Emperor family members.

At the end of the excursion, an open-air concert was held near the Manor House.

This year a wind orchestra «Trumpet Call» gave the concert. The musicians performed the works of Russian composers.

Special ornament of the concert program were songs performed by soloists of Mariinsky Theatre and orchestra of St. Petersburg Capella, and author songs.

As part of this education program Yuri A. Snisarenko gave a keynote address on Christianity in the modern world.

The program ended with a dinner held in panorama restaurant of Vyborg. During the informal meeting, the participants shared their impressions about this event.

Annual trip to the «Mon Repos Park» is one of the key activities of the education and outreach project «Russian Search of God». The project objective is to inspire a renewed interest in the little-known history of Christianity in Russia.

The project «Russian Search of God» is very grateful to the administration of the State Historical Architectural and Natural Museum-Reserve «Mon Repos Park» as well as the team of volunteers for the opportunity to organize and held the «Golden Autumn in Mon Repos-2014» event.