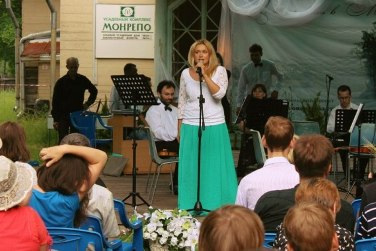 On June 29, 2013 a cultural and educational trip to the State Historical and Architectural Museum-Reserve "Mon Repos" (Vyborg) was held.

This is the second trip organized by the "Russian Search of God" project, with informational support of the St.Petersburg Christian University. More than 150 people were able to get acquainted with the little-known history of the Mon Repos Park and Estate - the cradle of the Russian Christian student movement and the Evangelical Revival of the early XX century.

The last owner of the estate, Baron Paul Ernst Georg Nicolai was a member of the Russian Bible Society and leader of the Student Christian Movement, which originated in St.Petersburg in the early XX century. One of the results of Nicolai’s efforts was the registration of the Charter of the Russian Student Christian Union in 1917; in fact, that meant the official recognition of the movement in Russia. In 1918, Christian Student Union of Finland elected him its Honorary Chairman. Paul Nicolai lectured at leading educational institutions of his time, including St. Petersburg, Moscow and Kiev universities.

The cultural and educational program "White Nights in Mon Repos" was opened by the guest of honor of the event - Marina Karetnikova, PhD in Education and Yulia Krasnikova, PhD in History. During the entire trip from St.Petersburg to Vyborg, in two comfortable tour buses, they were speaking about the Christian student movement and its role in the critical years of the Russian history.

On arrival at the Museum "Mon Repos", the participants took part in excursion program of the State Historical, Architectural and Natural Museum-Reserve, prepared and led by research scholars of the museum.

After the excursion, the participants were invited to reception.

At the end of the excursion, an open air classical music concert was held near the Manor House, with participation of "Credo" chamber orchestra under the direction of Sergey Izmailov and soloists from Moscow and St.Petersburg.

As a part of the concert program, several reports were made; in particular the report on the activities of Paul Baron Nikolai was made by Mikhail Efimov, a historian, Deputy Director of the State Museum-Reserve "Mon Repos". With great warmth he told about the last owner of the estate, noting his invaluable contribution to the spiritual and moral education of students of the early twentieth century, not only in Russia, but also far beyond its borders.

Special ornament of the program was classic songs performed by Oksana Belenkaya, the winner of multiple international competitions.

The audience was welcomed by Igor Lysenko, PhD in Philosophy, PhD in Theology, Professor of the Center of Church-State Relations of the Northwest Management Institute of the Russian Academy of National Economy and Public Administration under the President of the Russian Federation. He highlighted the importance of interfaith dialogue and making joint efforts in the field of spiritual education of youth.

The cultural and educational trip "White Nights in Mon Repos" ended with a dinner held in restaurants of International Business Center "Victoria" (Vyborg).

The organizers of the event received a lot of positive feedback from the participants. It should be noted that about 20 olunteers on the part of the project "Russian Search of God" were taking part in organization of the trip.

Study of the history of serving Christian denominations in Russia and holding various awareness raising activities aimed at introducing the history of Russian Christianity to a wide audience is one of the key activities of the project "Russian Search of God."

In addition, the education & outreach project "Russian Search of God" offers you the following:

- The sightseeing tour "Evangelical Petersburg". It is an educational tour, which gives the opportunity to learn about the life and work of the various actors of the St. Petersburg Revival, see the actual places where the events took place that affected the development of the evangelical movement in Russia, which had been growing outside the predominant confession for two centuries of the history of pre-revolutionary St.Petersburg.